Caution: This blog post is not a product or service promotional material. We published this information only for educational propose.

There are many things to consider before making the change from a car that runs on gasoline to one that runs on electricity. There is no doubt about what is better when EVs are compared with a vehicle that runs on fuel. There are advantages such as electric vehicles being less noisy, the costs for operation are not high, etc. On the other hand, not all plugs and electric automobiles are made equally.

The EV charger connector is also known as the plug-type standard. It is different depending on the region and the model. Even though there is debate regarding universal plug technology, most automakers support the Combined Charging System. At the same time, the manufacturers in Japan are using CHAdeMO. When it comes to China, they use GB/T. To your knowledge, China is the largest EV market in the world.

In addition, the available levels of power are not standardized around the world. They change based on the EV charger connector used in each country. In the next section, we will focus on all of these distinctions and additional information. 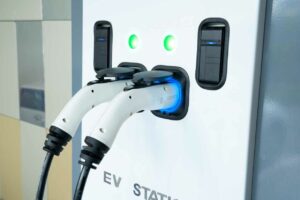 When it comes to Tesla, they supply an adapter cable. Tesla company is making charging stations of its own. They come with a unique Tesla connector.

These chargers are mostly available along major freeways in the USA. However, DC fast charging has a few additional challenges. The first one is that they are not accessible at home. It is because the required amount of electricity is typically absent in private residences and hence cannot be supplied by these chargers.

You should not use DC fast charging stations frequently. But why? That is mainly because the rapid rate of recharging might have a negative impact on the battery’s lifespan if it is done for an excessive amount of time.

DC fast chargers operate on 480 volts. At the same time, they can recharge an electric vehicle faster than what we call a standard charging unit. This makes it possible for electric vehicles to be driven long distances without the driver having to worry about their batteries running out of charge. Unfortunately, DC Fast Chargers employ not just two but three distinct types of connectors, in contrast to the J1772 and Tesla connectors. Let us explain what those are.

This type of EV charger connector uses the charging inlet known as J1772. The J1772 EV charger connector and the charging pins are combined in this adapter. The CCS is the standard that is used in North America. Almost every automotive manufacturer in North America today has signalled their intention to adopt the CCS standard. These manufacturers include Ford, Chrysler, Dodge, etc.

Kia stopped supporting this EV charger connector in 2018. Ev manufacturer Kia now only supports CCS EV charger connectors. They are different from the CSS Ev charger connecter. They are not sharing a portion of the connector with the J1772 inlet, and the vehicles must be equipped with an additional CHAdeMO inlet to accommodate them. Because of this, the space for the charging port needs to be expanded to accept two independent charging plugs.

These stations are for the use of Tesla customers only and were installed and maintained by Tesla. All Tesla users have exclusive access to these stations. Even with an adapter connection, it is impossible to charge an electric vehicle that is not a Tesla at a Supercharger station that Tesla has installed.

Let us summaries. There are two types of plugs for AC (type 1 and type 2). Also, there are two types of plugs for DC (CHAdeMo and CCS). The Type 1 plug is a single-phase EV charger connector and can charge at a maximum speed of 7.4 kW. It is typically seen in American-made vehicles. On the other hand, the Type 2 plug is a triple-phase plug that can charge at a power of up to 43 kW. It will become the norm for automobiles manufactured in Europe and Asia in 2018.

The CCS standard is a variation of the type 2 standard that includes two additional power connectors. It enables charging at a very rapid rate. CHAdeMO is a charging standard that is used in Asian automobiles, and it enables high charging capabilities.

Lastly, no matter what EV charger connector you use, remember that you should use an EV charging point correctly.